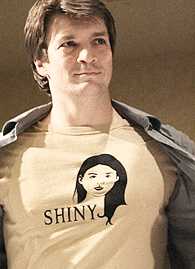 nathan fillion is a charming and rakish scoundrel. you can empty the barrel of superlatives at him —  raffish, affable, beguiling, genial, sly musical stylist. he is funny, self-deprecating, easygoing, laid back, a bro. nathan is a guy men like and women like to be around. (he was a spaceship captain, for chrissakes. it doesn’t get any cooler.)

but as a kid, nathan was anything but swashbuckling. he collected comic books. he dreamt of having superpowers. he wanted to be a schoolteacher. he rode a unicycle. he was a classic nerd.

and raised in the frosty reaches of northern canada, he hated the cold. when he wasn’t fantasizing about saving the world, nathan dreamed of warmer climes, palm trees, girls in bikinis, and perennially balmy weather.

years later, fueled by persistence and the heady early technology of the vcr, nathan got his wish. thanks to the cult of firefly and serenity, he is a nerd culture superstar. thanks to his own love of video games, he is a gaming world luminary. and thanks to his hit network drama, he doesn’t fantasize about palm trees or girls in bikinis anymore. he is drowning in that shit.

nathan fillion got everything he wished for all those years ago up in icy, frozen alberta. maybe he actually does have a superpower after all.

join aisha and nathan as they obsess over technology, talk dirty to siri, sink into hollywood despair, argue superpowers, examine cult status, and compare gaming cred. plus halo is the golf of our generation, and nathan has a run-in with a dangerous cocktail.

girl on guy is gonna need a sippy cup.