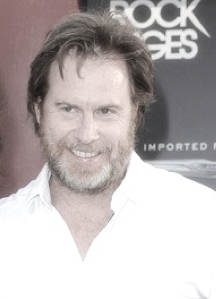 chris henchy always wanted to be a comedian. but he was also a practical guy. so he finished high school. went to college. got a job. packed a lunch. wore a suit.

but try as he might to toe the line, he couldn’t get comedy out of his head. so he finally moved to new york. still practical, he got a job on wall street, but it was all a ruse, an elaborate farce meant to get chris closer to the art form he loved.

problem is, when he finally got the stones up to try stand up, he had to follow a musical act. the sheer terror of having to follow a guy doing a bit about ghandi on an acoustic guitar (a bit that was killing, btw) was enough to send him fleeing into the street. but chris didn’t give up. he eventually tried his hand at comedy writing, where he could mine the gems and others could take the risks (and eventually, reap the very generous rewards) of his toil.

there were points both high and low, and dry spells along the way, but eventually chris’ talent landed him in the company of adam mckay and one will farrell, just as they were forming a new company whose sole goal was to make funny shit — or die trying. years later, that company is both a popular website and a household word, and funny or die — as well the production company will, adam and chris run as a team, gary sanchez — makes wildly popular films, cult-forming television shows, monster viral videos, and a gargantuan amount of mayhem.

and now that dude never has to wear a suit again.

join gentleman writer and comedy cowboy chris henchy of gary sanchez and funny or die and aisha as they discuss getting off the res, the misery of the boot-cut jean, updating your rolodex at work, the obsolescence of the brad, making it through the dry spells, surrounding yourself with excellence, why the bits always win, and why you can’t monetize boo.

plus chris hits the ER at four in the morning like a champ, and aisha pulls a podcast foul.

girl on guy’s about to get in a bat fight.