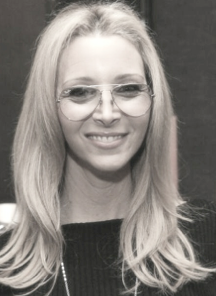 if you are lucky enough to speak with lisa kudrow for longer than thirty seconds, you are immediately struck by how smart she is.

not in that presentational, “here’s how many words I know, feel free to hit up wikipedia later to clear up any murky bits” way. more like in an “i know a lot of stuff and am staring through you into your very soul, and therefore do not need to impress you or the room” kind of way. lisa is smart. dryly, cuttingly, self-deprecatingly, hilariously, blindingly smart.

so it won’t surprise you that at one point in her life, she planned to be a doctor. it also won’t surprise you that when she used to watch television, she would analyze jokes and think, “that could have been delivered better.” thankfully, she took the adage “physician, heal thyself” to heart — well, kind of — abandoning medicine to demonstrate to herself and the world just how comedy should be done.

while the rest may be history, it is a varied and compelling one, with roadblocks and crushing setbacks sprinkled throughout. lisa may have eventually become one-sixth of one of the biggest comedy teams in television history, but her life, and her work, are much more than that. and in her (relatively) new role as fiona wallice on the showtime comedy web therapy, she gets to bring that early medical training to bear on the role of a therapist who only thinks she is smarter than you. and will definitely take the time to tell you so. in three-minute increments.

spend just a few minutes with lisa kudrow and you can see she is a monster comedy mind. luckily, we get her for ninety.

join comedic surgeon lisa kudrow and aisha as they dissect growing up in the valley, the phenomenon of friends, keeping your shields up, letting your guard down, making things for the internet, the thin line between fantasy and batsh*t madness, good news gone bad, and why horrible people are so incredibly funny.

plus aisha is stricken with terror on the friends set, and lisa quits smoking. very slowly.

girl on guy is about to inhale.