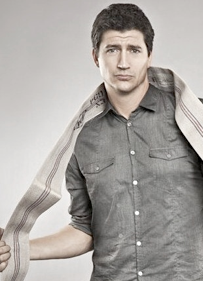 when he was young, ken marino was one of those unique kids who swung both ways: he played sports and he loved theater. eventually, his coach gave him an ultimatum. he couldn’t be an athlete and also do musicals (coach failed to see the raw athleticism inherent in ‘pippin’). ken had a choice: be a jock, or do theater. luckily for ken, it wasn’t much of a dilemma. he quit sports, pulled on some tights, and the rest is history.

ken went on to be a member of the seminal comedy troupe the state, and star in a multitude of films and television shows, including wet hot american summer, dawson’s creek, party down, and children’s hospital. not content with just being a comedic actor, he went on to write screenplays for films including diggers, the ten, role models, and wanderlust, as well as direct and produce. his latest effort, a jarringly hilarious satire of dating shows called burning love, manages to thrill, delight, and deeply alarm all at the same time.

ken clearly isn’t good with ultimata. but now, instead of choosing one path or the other, he chooses them all. ken is a wild-eyed multi-hyphenate comedy hydra who does whatever the hell he wants.

plus, acting class in hollywood is worse than you imagined, and aisha tries to beat the truth out of ken, but ken remains stoic.

get the towels. girl on guy is about to start waterboarding.