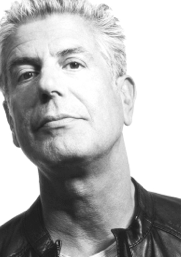 girl on guy 48: anthony bourdain
no reservations, the layover, your mom’s kitchen

anthony bourdain lives exactly the life you think he does.

he travels the world relentlessly. sleeps late without guilt. drinks copiously at noon. dines wildly at midnight. eats rarified foods and washes them down with oceans of booze. curses, unfettered, at friend and foe alike.

he also gets stranded in airports. blinded by piercing intestinal distress. fed parts of animals best left to carrion. trapped by bombs in active war zones. and perhaps worst of all, is occasionally forced to eat really, really bad food.

anthony bourdain is a vagabond poet living a kerouac life in the era of zuckerberg. he does what he wants. eats what he wants. goes where he wants. says whatever he wants to whomever the fuck he wants. anthony is pure id, wrapped in the shaggy, reckless, haunted vessel of a latter-day hunter s. thompson.

and while the rest of us fantasize about roaming the world, doing shots with ex-guerillas in the dark crevices of some seething, humid city over bowls of steaming pho, anthony is doing it.

and he got someone else to foot the entire bill.

anthony lives exactly the life you think he does, and he is not afraid to rub it in your face.

join rock star food renegade anthony bourdain, of no reservations and the layover, and aisha as they hack through getting high in the walk-in, butting heads with ted nugent, the politics of food, the stink of western optimism, earning respect on the yard, the pleasure of pain, and the implied consent of the hot dog.

plus aisha enrages koreans, and tony eats a piece of ass. just a tiny piece. to be polite.