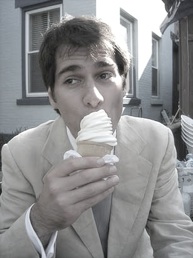 when time magazine columnist joel stein found out he was having a baby boy, he didn’t build a hope chest, assemble a crib, buy cigars, or start a college fund. his response was much more visceral, more authentic, and very immediate.

he freaked the fuck out.

joel was having a boy, and he worried he wasn’t man enough to raise a little dude. joel can’t toss a football. joel has never thrown a punch. joel is so polite (or racked by testicle-shrinking fear) that it once took him eight dates to kiss a girl (including one date where he watched a movie in the girl’s bed. I mean, come on).

he realized, through blind, pukey fear, that if he was going to raise a boy, it was time to man up.

the result is “man made: a stupid quest for masculinity”, a book that chronicles joel’s quest to grow a pair. he lived in a firehouse. he threw a baseball. he fired a tank. he entered the octagon. he drank some really old booze.

along the way, he learned some stuff. he grew as a person. mostly he puked and passed out. but he did it… like a man.

join time magazine writer joel stein as they scrawl through breaking up in the cloud, wearing other men’s pants, why animals are horrible people, pity sex, racist magazines, atheist judaism, hipster racism, and the rules of parody. plus, aisha insults little people, and joel angers almost everyone. girl on guy is going to blame the macallan.