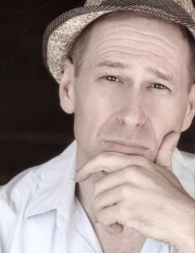 girl on guy 46: scott thompson
the kids in the hall, larry sanders

there are few sketch groups as beloved, as seminal, as devastatingly funny or as fully off-kilter as the kids in the hall. a whirlwind of wildly imaginative characters, intense absurdity, and bold sexual farce, the canadian squad burst onto american television from the north and dominated american television, first airing on HBO and later moving to CBS late night in the plum spot behind letterman. their deconstructed approach to sketch comedy and fearless irreverence made them an odd fit, attention-getting fit for american television. which was just how they liked it.

even though the group spent a huge amount of time in drag, the only gay member of the group was scott thompson. a wild-eyed performer who was unafraid to try anything and often tried everything, scott stood out as a killer performer in a group of killer performers. he was bold, driven, and as first revealed in theater school, not afraid to bleed for his comedy.

after a meteoric reign, the group disbanded in rancor. scott went on to a frenetic run in films and television, battling cancer and his own demons along the way. today, healthy in more ways than one, he’s repaired old wounds and rejoined the reunited group, whose popularity has waned little in the years since their pilgrimage south.

young sketch comics still mention that their strongest influence was the kids in the hall, a raving gang of comedy toughs, whose most devastating skill was their ability to make you laugh uproariously and feel deeply uncomfortable at the same time. and maybe that was the point.

scott would tell you that was definitely the point.

join kids in the hall’s enfant terrible scott thompson and aisha as they skate through surviving childhood, squirrel racism, d*ck bells, violent improv, sex magic, hating brecht, harassing upwards, live-saving gunfire, and embracing the terror of comedy. plus, scott dares you to punch him, then pulls a john mcclane.