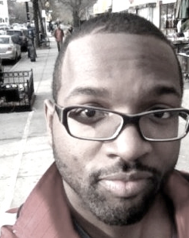 baratunde on twitterthe official websiteget "how to be black"the onion

girl on guy 42: baratunde thurston
digital director, the onion; author, how to be black; vigilante pundit

with a first name like his, you might make a bunch of assumptions about who baratunde thurston is. where he came from. what he’s done.

a graduate of sidwell friends who later got his degree in philosophy from harvard, worked as a corporate consultant, moonlighted as a blogger and standup comedian, and then went on to write four books, found an influential political website, and run the digital division of the onion, baratunde is a conundrum, wrapped in a riddle, and shrouded in the kind of mystery that can only be described as black nerdism, or blerdism.

he self-publishes satirical tomes. he quotes kant. he rides a bike around manhattan. he has a whole different kind of street cred.

with an enviable position at one of the most influential comedic websites in the country and a new book, how to be black, on the new york times bestseller list, baratunde is an incandescent fixture of the burgeoning blerd firmament. and when he and aisha sit down to talk, what follows is a black nerdsplosion of epic proportions.

join onion’s director of digital and reigning blerd prince baratunde thurston and aisha as they masticate the allure of the free drunk, analyze the lack of nordic exceptionalism, discover why baby blue satin isn’t all it’s cracked up to be, enrage an already livid new england city, and demonstrate how to kick someone’s ass. literally. plus aisha forces baratunde into a reluctant aristocracy, and we reinforce every stereotype you have about harvard nerds.

girl on guy is looking for a panty-dropping algorithm.