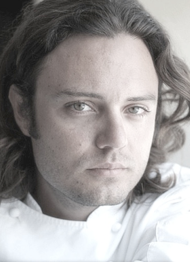 david myers floated into becoming a chef the way a shark floats into a sea-slick of chum: aggressively, with a frenzy both terrifying and awesome.

an upstart who prizes hard work, aggression, and relentless vision over traditional vocational training, david pursued his dream of creating extraordinary dining experiences with something akin to bloodlust. from the minute he walked into his first kitchen, david has known what he wanted to do, and nothing — not burns, knife injuries, sh*tty coworkers or imperious chefs — would keep him from that mission.

david was hell-bent. god help the poor soul who got in his way.

the result has been a burgeoning culinary empire that spans two continents and dazzles and delights diners around the globe. but the chef is still the same man: driven, unguarded, focused, passionate, and able to take a life-threatening knife injury without blinking. david myers is a gentleman firebrand, and he is just getting started.

join culinary wunderkind david myers and aisha as they slice through dude cooking, the hubris of youth, the real meaning of “bone,” miles davis in paris, washing the lettuce, screwing the pooch, and why chefs drink.

plus, aisha is a blathering obnoxious foodie, and david loves sushi. like, a lot.