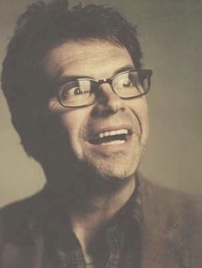 there is no one with even a passing interest in standup comedy that does not know dana gould. a man who by his own admission was honing his art as a toddler, dana has been a killer standup for longer than many of us have been alive. and those years have produced an inspired artist at the height of his craft.

dana has done everything. every comedy club. every armpit one-nighter. every late night talker. multiple comedy specials. television series. a writer on the simpsons. dana has been a dominant figure in the comedy field for almost three decades, his relentless assault on the comedy ramparts fueled by equal parts passion, brilliance, and sheer, abject despair.

because if there is an archetypically bruised psyche wedged beneath the furrowed brow of the standup comic, dana has it. a fractured and outsider childhood led to years of untreated and often crippling anxiety, anxiety he has alternately battled and exploited for most of his life. dana emerged finally from years of paralysis with crisp clarity and raucous perspective, but no less cuttingly analytic or devastatingly hilarious. well-adjusted, happily married, a father, a comedian at the peak of his game, and now a podcaster, dana gould has come through hell to get here, dear friends. and he has brought a shitload of jokes along with him.

join comedy firmament fixture dana gould and aisha as they discuss the tyranny of children, old guy resentment, growing up unsupervised, new england taciturnity, living in squalor, doing crimes, and the horror of the blacklight. plus, boston is a bastion of tolerance, and aisha gets the heebie-jeebies.