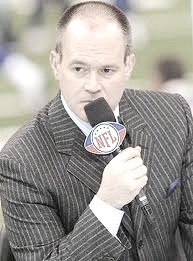 you watch sports television 16 hours a day. you obssess about it. sweat during it. rant over it. scream at it. weep uncontrollably in front of it. you feel confident you could do a better job than the slobs in suits yammering about random stats behind that gaudy neon desk… but let’s face it, you can’t.

you’re an armchair pundit at best, a drunken superfan with rage issues at worst. that job is savagely difficult, the culmination of a lifetime of devotion and tireless research, and the guys behind that desk are the real fucking thing. and rich eisen is here to prove it to you.

a guy who loved sports from an early age despite an almost pathological lack of ability, rich always knew he wanted to be a sportscaster. he dreamt about it, and then, unlike you, he did it. wrote sports columns for his college paper. moved to pot-lousy northern california to be a small-town sports jockey, covering girls’ volleyball and pop warner scrimmages. and when the call came, he was ready, with a VHS audition tape worthy of vintage south park. he moved to new jersey, joined the preeminent sports network in the world, and the rest is post-game analysis. after being a part of the most well-known sportscenter duo in espn history, eisen moved to the nfl network, where he talks football ad nauseam with some of the biggest names in pigskin, including michael irvin, warren sapp, kurt warner and steve mariucci. with vip sideline access, hall of fame co-anchors and stat assistants, eisen is literally living the dream. and he’s nice enough not to rub it into your face.

well, not too much.

join sports journalist rich eisen and aisha as they pound out small town sportscasting, the olbermann doctrine, twitter haters, racist accents, getting recognized in the hood, grown men who cry during friday night lights, and deion sanders’ ridiculous closet. plus eisen has an award for your ass, and aisha insults an unidentified ethnic group.

girl on guy is about to go for two.