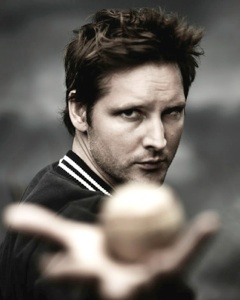 peter facinelli is not who you think.

the first-generation american son of italian immigrants met as teens and married young, peter didn’t grow up fancy. his dad worked three jobs to provide for his family. peter grew up painfully shy, not a grandstander, no showboat, a good catholic boy who rode a bus across town to attend school, wore a shirt and tie to class, and dutifully put aside his dreams of being an actor to please his family.

it was only in college that the acting beast awoke. in quick succession his talent won him roles on some pretty iconic projects: dick wolf’s law and order. riding in cars with drew barrymore. jumping out of them in mcG’s series fastlane. and then he nabbed one of the biggest brass rings of all: playing dr. carlisle cullen in the steamroller mega-franchise twilight. the twilight films have grossed almost two billion dollars. girls across the planet squee at his mention. people may not be able to pronounce “facinelli,” but it’s still a household name.

to peter, no matter. he may have lost the queens accent, but he hasn’t lost one bit of the hardworking, sleeves-rolled, straightforward work ethic his father instilled in him back in the borough. he still busts his ass: working multiple jobs. writing, producing and creating his own projects. starring in six feet under. damages. nurse jackie. and he’s just getting started.

join peter and aisha as they discuss booze snobbery, catholic school PTSD, the immigrant work ethic, whinypuss actors, buying your way into a role, and how twilight can get you laid. plus, peter and aisha forget the names of those closest to them, and aisha fangirls all over the place, then pokes herself in the eye.