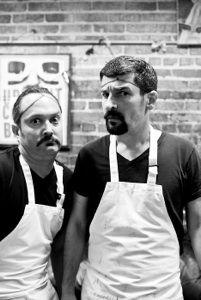 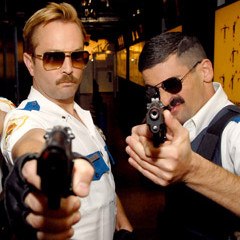 tom lennon and ben garant have had it tough.

you may not be able to tell from their delicate hands and soft exteriors, but tom and ben have had to weather an inexhaustible litany of personal challenges. they first met in a pre-bloomberg new york, when bandits and hookers roamed freely, muggings were an every day occurrence, and even the pigeons packed heat — and barely made it out with their lives. out of that crucible came the state, a sketch comedy troupe so fraught with comedic genius and simmering creative tension that meetings would devolve into late-night benders, and members often punched each other square in the face.

after an abrupt and ignominious end to the state, tom and ben went on to create such seminal comedic touchstones as viva variety, reno 911, and the night at the museum franchise. as they detail in their new book, writing movies for fun and profit, the films they have written as a team have grossed more than a billion dollars at the box office. that’s right, billion with a big, sticky, filthy “b.”

and yet, along the way, they never lost their sense of awe, bright-eyed wonderment, or taste for a two-dollar beer or a reckless, profanity-laced rant. tom and ben ran the comedy gauntlet and came out on top. or as they would say, at the very top of the middle, astride a massive stinking heap of money.

join tom, ben and aisha as they discuss drunk walking, shit bakeries, manager perfidy, f*ck ninjas, fisticuffs at the state, ending jimmy fallon’s movie career, and the art of spectacular self-immolation. plus, there’s no dangle if there’s no brain, and new york tries to kill tom. repeatedly. girl on guy. warriors… come out and play-ay…