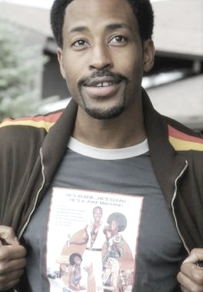 dwayne perkins is an international man of comedic mystery. a dry, thoughtful comic who got his start in the rough trade of the new york comedy scene, dwayne worked his way up through the ranks the old fashioned way — he earned it.

diametrically different from the bombast and rant so popular in comedy today, dwayne’s affability, sly sarcasm and off-handed, cutting brooklyn style has taken him far — around the world, in fact. he’s parlayed his smart, decidedly atypical act into a varied career, with standup performances around the globe, a litany of television commercials, a comedy central special, and multiple appearances on the tonight show, late late show with craig ferguson, and every single iteration of the conan o’brien show.

smart, restrained, and drily surprising, dwayne is everything and nothing you’d expect from a standup from brooklyn. he works constantly, travels non-stop, always writing, always moving, always hustling.

and in his infrequent breaks, he finds time to make a little toast.

join aisha and dwayne as they chop up british inflexibility, law and order london, frigid chicks in miniskirts, the loneliness of the road, trolling in hong kong, getting banned from dubai, jumped in south africa, and what not to say on a train. plus dwayne loves the honeys, and aisha insults korea.

girl on guy. roll the window up, son.