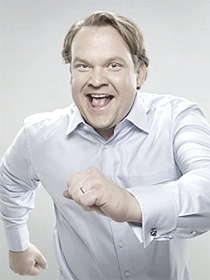 in the nuclear meltdown that was NBC’s spectacularly aborted effort to rejigger its late night lineup, the person that may have been heard from least is andy richter, conan’s compatriot and erstwhile sidekick. yet his take on those events is unvarnished, unflinching, and deliciously uncensored.

exuding a midwestern charm so heady he could weaponize it, andy richter often seems to radiate sweet sidekick wholesomeness. in reality he is razor smart, icily cutting, and wonderfully, unapologetically dirty. insanely hilarious in his own right, andy started out as an improv artist and comedic writer, and was there from the nascent days of late night, a friend and foil to an early conan o’brien who had almost no live performance experience and was often pulled rigid by nervousness. originally hired as a staff writer, andy and conan had almost instant chemistry, and through early screen tests andy proved himself a quick and funny conversationalist. from the inaugural show, andy was conan’s partner in crime, and has been ever since.

andy left late night in 2000 to spearhead several scripted shows, including fox’s andy richter controls the universe, and nbc’s andy barker p.i.; both were well-received by critics but never found their stride. he rejoined conan on the revamped tonight show, writing and eventually joining conan back on the couch. the subsequent epic bed-crapping by the network is the stuff of infamy, with conan eventually taking his show on the road with andy at his side. now reunited on tbs’ conan, andy is enjoying the kind of creative freedom not seen since those early years at nbc, when network interference was low, risk-taking was high, and comedy was all that mattered. it is a very good place to be.

join writer, improv comic and late night two-man wolfpack member andy richter and aisha as they discuss the flop-sweaty early days of conan, internet profanity, development hell, the infamous tonight show implosion, going on tour with coco, the icy grip of creative fear and doing whatever the f*ck you want in late night. plus, andy gets drunk and naked and aisha draws a crude venn diagram.