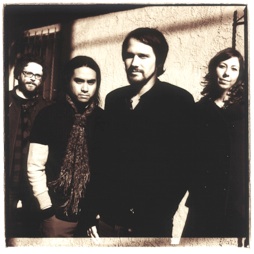 the rock music firmament is an intemperate and dangerous place. bands are concepted every day, logos designed, t-shirts printed before they’ve ever played one live show. driven by the corporate marketing machine they rocket to notoriety, enjoy a few brief moments of incandescence, then hurtle back towards ground.

silversun pickups are wholly different. the musicians that comprise the band are committed to art, driven by a love of experimentation and live performance, and bonded by a longtime devotion to true musicianship.

named after a corner store in the silver lake neighborhood of los angeles where they would grab beers to fuel late-night rehearsals, as young musicians they attended each other’s shows, sold each other’s music, recorded collaborative albums, formed the indie rock ship collective, and forged a bond sparked in the independent club scene and cemented by exploration, love of originality, and passionate self-promotion. their work and core ethic are a fusion of their own sprawling creativity and the bold ambition that is los angeles.

the result is a body of work that expressive, transporting, surprising, and extraordinarily unique. silversun pickups’ viciously dreamlike music can soundtrack both a bourbon-fueled all-nighter or a lazy day spent in bed — it is both buoyant and dark, intelligent and subversive, emotional and razor-sharp.

join christopher guanlao and nikki monninger of the silversun pickups as they hunker down with aisha to discuss indie rock, star wars heartbreak, self-startership, staying committed to vinyl, tour bus hygiene, death trap road trips, and getting to the greek. plus self-inflicted wounds is a four-human pile-up, and we all learn a valuable lesson about robot sex.

girl on guy. we stay independent.