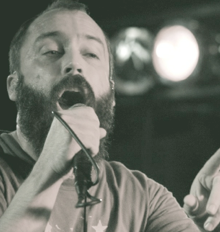 every kid dreams of being a rock star. they buy the guitar. wear the clothes. paint their nails black. generally act like a douche. and never actually do any of the work it takes to get there. yeah, most kids dream about being rock stars. most kids are posers.for two decades, clutch has done the gritty, unrelenting work of making that dream a reality. practicing constantly. touring endlessly. walking on stage night after night, town after town, delivering artful no-bullshit music to enthusiastic rock purists.

and while you probably know their music (the anthemic electric worry has been used to promote everything from zombie kills to cop dramas) you may not know their name. that changes now.

devoted to the dying art of the live performance, clutch tours mercilessly, playing hundreds of concerts a year. they release their own music on their own label without outside input or compromise, and have crafted a career for themselves that is both personally satisfying and creatively influential. they refuse to bend to trends, cranking out explosive blues-tinged hard rock that manages to be intelligent, wry, prophetic and unabashedly muscular. clutch is real.

and then there’s those fearsome beards.

join lead singer neil fallon and aisha as they jaw about the paralyzing fear of being onstage, the misery of touring with a bunch of dudes in a van, the death of payphones, stabby truckers, judgemental hardcore assholes and the end of days. plus neil and aisha bond over their love of beer, then stroke/strike norway.