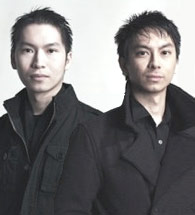 more about the lunaslunas on twitterget girls: ultimate hardcoverget ultra: seven daysget the swordget the image comics app(the easiest, if less elegant, way to download all the lunas’ books right away)

sibling rivalry can be a powerful thing. on occasion it results in toy mutilation or fisticuffs. in the case of jonathan and joshua luna, it has produced an artistic partnership that is both dazzling and prolific.

published by image comics, the same imprint as drawn fiction titans robert kirkman (walking dead) and todd mcfarlane (spawn), the luna brothers have carved a highly distinctive niche for themselves in the graphic novel-verse in a very short period of time. their first series, ultra, about the nexus between heroism and celebrity, put them on the map, attracting hollywood attention virtually overnight. their second, girls, about earth’s invasion by a very specific alien army bent on its own kind of domination, cemented their place as groundbreaking artists who create without compromise. their third series, the sword, about a young woman hell-bent on vengeance, is a shocking, thrilling, and ultimately devastating portrait of the personal cost of revenge — the kind of book that draws delight while simultaneously eliciting audible cries of “holy sh*t!” and “what the f*ck!”

all the luna brothers’ books are visually distinctive, startlingly ultraviolent, and seductively smart. they entertain, yes, almost deliriously so, but if you pry deeper, they are laden with big ideas about culture, fame, sex, gender, family and deep personal sacrifice. of course, on their face, they are just badass superhero and alien invasion stories. so take off the mortarboard, poindexter. the luna brothers are gonna show you a good time.

girl on guy. please, keep your distance; the wildlife may fling poop.