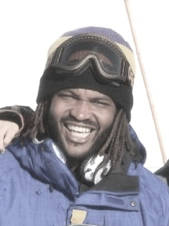 if you don’t know sal masekela by name, you definitely know him by sight. the face of extreme sports on ESPN for more than a decade, including their wildly popular x-games, sal definitely stands out. in the extreme sports world — typically a sea of almost entirely homogenous faces — sal is that ‘black dude with the dreads’ in the forefront at every major event.but sal isn’t just a sportscaster, or some television executive’s idea of a unique casting choice — he’s a guy who knows his shit, because he’s lived it. a black guy who has skated, surfed and snowboarded almost his entire life, sal is used to standing out.

in fact, sal has always been a singular dude — some might say unique, unusual, weird even. the only black guy in his new england school to skate and listen to punk music. the son of a world famous musician who got pulled out of school to go on world tour (and got all kinds of lucky along the way). the east coast kid who moved to california and shocked everyone by blowing off football and music to become a surfer. the kid with the famous last name who worked as a busboy to feed his surf habit rather than take money from his wealthy father. the guy who parlayed a job answering phones at a surf magazine into a dominant career in extreme sports through passion, drive, and sheer force of will.

sal is used to standing out, and often, standing alone. that outsidership has made him brave, ambitious, humble, and fearless. and his passion for boardriding has made him the face and voice of an entire sports culture.

join sal and aisha as they bond over their mutual love of board sports, their outsider childhoods and shared time at e!, and how getting exactly what you don’t want can be the best thing that ever happened to you. plus sal puts the moves on christie brinkley and vows to never drink gin again.

aisha does not join him in this rash and foolhardy decision.

girl on guy. we are going to rip this shit up.