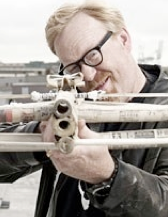 when adam savage was a little boy, he built complex cities out of legos, and dreamed of one day unleashing his awesome powers of construction on the world. now, years later, he builds much bigger, much better structures… and then blows them all to shit.a veteran effects man and model builder who spent critical years at george lucas’ industry-leading industrial light and magic effects house, adam has worked on such star wars episode 1 and 2, AI, terminator 3, and this girl’s favorites, the matrix:reloaded and the matrix:revolutions.

but it is his work alongside taciturn co-host (and former boss at M5 industries) jamie hyneman on the seminal discovery show mythbusters that has really brought adam’s genius to the fore. everyone who watches mythbusters is gripped by it. from tossing people over waterfalls in barrels to catapulting bloated carcasses over castle walls to blowing up… well, pretty much everything, mythbusters is a 13-year old boy’s wet dream come true. and after ten insanely successful years on the air, that lego-obsessed kid’s now got way better toys to play with.

join adam and aisha as they spaz out about robots, guns, legos, explosions, action movies, rotting corpses, sex on pirate ships, destroying things for a living, and why star wars episodes 1-3 sucked so very badly.

plus adam almost drowns in an upside-down car, and aisha tells hollywood it sucks to its face.

girl on guy. in every tool there is a hammer.