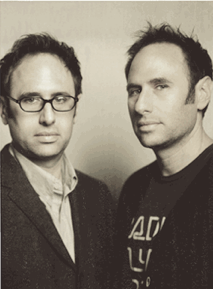 most comedy teams never make it far, doomed to fall prey to the vagaries of ego, ‘creative differences’ and the inevitable coke-fueled downward spiral towards a failed 70s rock album and subsequent job as a clinically depressed mall security guard.the sklar brothers are unique. not only have they been a comedy team since they were teenagers, they have been and continue to be incredibly successful at it. a big part of that comes from their work ethic. from the beginning they have worked tirelessly to turn their ideas into wildly original comedic programming, from mtv’s apartment 2F to espn’s cheap seats to their current comedic masterpiece, sklarbro country, a podcast as polished and well-produced as it is dazzlingly funny and purely original — a distillation of the best of sports talk radio smashed together with high-speed comedic riffs, slapshot banter and interviews with both real and imagined celebrities. the sklars are a comedic powerhouse, cranking out the comedy nonstop. all while holding onto their dazzling midwestern charm.

plus there are two of them, which makes things twice as fast, twice as funny, and, occasionally, twice as dangerous.

girl on guy. stay tuned for the big rap finish.