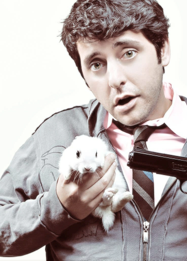 ben gleib is a young comedian, still reveling in the heady salad days of his career. since his television debut (in college, no less) he has been on a slow, steady and inexorable rise to the top. young ben gleib is funny. young ben gleib is earnest. young ben gleib is steeped in the fresh-faced bravery of youth, which has, in turn, bestowed him with huge balls. massive, dangling, stainless steel cajones. you’d think this might make him a jerk, but to the contrary: he is self-effacing, funny, kind, and eager to complement and laud other comedians whenever possible.that still doesn’t mean he hasn’t engaged in one act of reckless hubris after another, including several that could have gotten him arrested by both vice cops and immigration authorities, and one that ended in sucker-punch fisticuffs with a certain greasy dirtbag fauxlebrity. the kid’s practically top-heavy with sack. and he’s not afraid to use it, usually to discomfitingly comedic effect.

join ben and aisha as they kick around masculine beverage choices, racist accents, joke theft, and why having big swinging balls isn’t as good an idea as it sounds. plus aisha joins a truckin’ convoy and calls out nancy grace.

girl on guy. um, you might want to get those looked at.