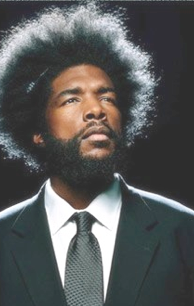 to innovate is difficult. to innovate in hip-hop is almost impossible. to quote questlove, “no rap group makes it past the ninth record.”to constantly innovate while remaining influential, relevant and plain badass over 19 years in the rap game is a feat only multiple grammy-winning band the roots have accomplished, while maintaining their creative integrity and artistic aggression. from busking the streets of philly to their debut album organix, to their groundbreaking record things fall apart to the hip-hop radicalism of phrenology and game theory, the roots always innovate. and as the coolest band in late night, the roots are bringing that innovation to late night with jimmy fallon, to epic effect.

as drummer and musical id of the roots, ahmir “questlove” thompson has been as influential on other musicians and bands as on his own, producing, arranging and drumming for acts as wide-ranging as joss stone, amy winehouse, john legend, jay-z, zack de la rocha, john mayer, the beastie boys, karmin, fiona apple and evanescence. and that eclecticism reaches beyond hip-hop to include an unapologetic love of mad men, harry potter, radiohead, punk music and legos. that’s right. those legos.

kick it backstage at fallon as questlove and aisha discuss how to get over, hip-hop nerd revenge, the power of fear, and how to pull a helmet. plus, cloris leachman drops it down and backs it up, we figure out who in the roots is in griffyndor and who is in slytherin, and aisha angers baseball fans.

girl on guy. we are all about to be schooled.