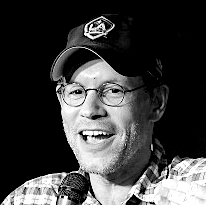 bob on the kevin nealon showbob on comedy centralbob is not on twitter.

i have known bob oschack for years. he is one of the most thoughtful and meticulous writers i know, and a blast in a writer’s room. so much fun, in fact, that I hired him to write on a television pilot i developed years ago. bob is a standup, and a funny one, but he excels at writing, and now writes for craig ferguson on the late late show. bob understands the complexities of phrasing and word choice, and knows how subtle changes can completely alter the nature of a comedy bit. and while he has spent years on stage honing that talent, bob prefers to labor behind the scenes.

that is why it is so ironic that one of his few forays back front of the camera went so completely awry. and because bob prefers to labor in shadows, that single, explosive, comedic misstep has marked and followed him for years. this is a story about how social media can be a tool for both fame and infamy, and how rejecting it can both free you and imprison you at the same time.

join late late show writer bob oschack and aisha as they they barrel through workplace drinking, teasing dicaprio, the heartbreak of idols, consistent villainy, conquering fear, the horror of the open mike, getting out of memphis, taking the swing, and caring for your lane. plus bob is driven from the internet forever, which in internet years, is a mighty long time.

girl on guy is going to do this one analog.