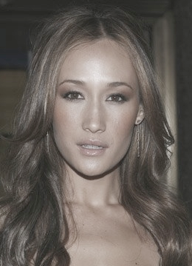 maggie q is tougher than you. don’t take it personally. she’s tougher than most people.it’s not just that she left home alone at seventeen for asia without knowing one word of chinese, or that she slept on a stranger’s floor for a year while fighting constant rejection and abuse from agents, or that she told the biggest action star in the world she wouldn’t work with him if it meant compromising her principles, then worked her way up to being one of the biggest female action stars in asia, all on her own terms. maggie also does all her own stunts, works longer and harder than anyone around without gripe or complaint, and can jump and wrap her legs around a man’s neck from a full stop at three meters. plus she once wrestled a full-sized buck. that’s right, a deer. with antlers. in real life.

and yet somehow she has managed to remain kind, generous, professional, loyal and maddeningly down to earth. i mean, what the fuck is going on?

join maggie and aisha over a ripstop pancake breakfast as they rant about holding onto your integrity, turning down jackie chan, why american actors are such whiners, and who in hollywood deserves to get punched in the throat. plus bagel weaponization, the danger of dark matter, and aisha tells her very first self-inflicted wounds story.