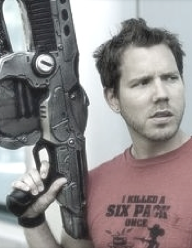 more about gears of warmore about cliffcliff’s philosophy of iteration

cliff bleszinski (aka @therealcliffyb) started designing video games when he was just a little dude. since then cliff has applied his mad genius to some of the most seminal video game franchises of our time, including unreal tournament, lost planet, bulletstorm, and this girl’s favorite, gears of war. cliff is now a very, very big dude. like, over 13 million units sold worldwide for the gears franchise alone big.

the dude is huge.

with the long-awaited third installment in the cock-diesel EPIC franchise thundering out September 20, aisha flew to nyc for the gears of war 3 worldwide game launch, and a little quality time with cliff.

grip your controller as cliff and aisha chainsaw through the satisfaction of nerd revenge, failure as a winning strategy, how to talk to your girl, and the joys of bludgeoning an opponent with his own arm.

plus, really happens in a mexican resort when dude huge gets his hands on some some tequila.