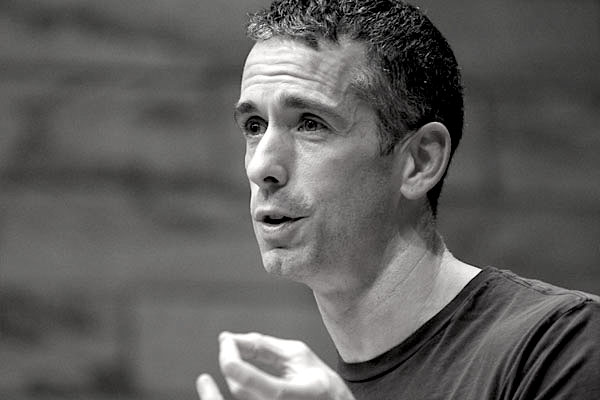 Dan Savage does not care what you think.

He is not concerned with social mores, cultural propriety, or the delicate rules of polite conversation. Dan Savage is here to tell the truth. The truth about sex, homophobia, bullying and matrimony. About religion and parenting and infidelity and fetishism and blow jobs.

Yes, the truth about blow jobs.

Dan Savage has a savage mouth and he uses it as a weapon. Dan does not care if your feelings are hurt. He has pissed off everyone from the Catholic Church to the gay community and everyone in between. He will say exactly what he thinks, and occasionally what he doesn’t think, to provoke a response.

Dan Savage is a warrior for freedom. Personal freedom. Sexual freedom. Intellectual freedom. And yes, the freedom to get, or give, blow jobs. Or, all of the above.

If that’s your thing.

join columnist, author and activist dan savage and aisha has they rage about sucking it up for jesus, being hot for leif garett, honoring thy father and mother, sympathy for ted haggard, redefining marital success, double bagging it, honesty versus kindness, and obliterating the center. plus dan says exactly the wrong thing at the right time, every time.