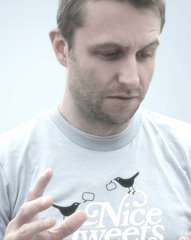 girl on guy 09: chris hardwick
the nerdist, web soup, attack of the show

to wit: both are standup comedians. both hosted cringe-worthy dating shows. both worked at e! and both have embraced the crushing nerdiness of their childhoods, turning it into a frayed and brazen badge of adult comedic courage.

chris has done so to wildly successful ends, launching a massively popular blog and podcast, both entitled, appropriately, the nerdist; appearing on not one, but two television shows: web soup and attack of the show; and building a podcast production business that now offers other nerds their own shot at world domination.

with a new book, the nerdist way, out this fall, a television version of his podcast due to air september 24 on bbc america, and a burgeoning podcast empire that threatens to engulf all who venture near like some nerd event horizon, chris has every right to be a steaming plate of high-rolling jerk. instead, he is smart, genuine, self-deprecating, forthcoming and wonderfully hilarious.

join aisha and chris as they wax highly inappropriate about self-abuse, sex with Aeon Flux, scaring the sh*t out of yourself, and trying to trick college girls into sleeping with you. plus, the plural of pussycat is not pussyscat, and we all pile on the kardashians.

my dear mr. hardwick, welcome to girl on guy. we have been waiting for you.