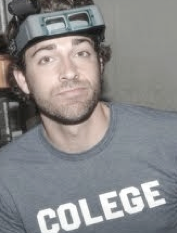 zachary levi is a nice guy. but that doesn’t mean he won’t shoot you in the face if he has to.

on this point, aisha and zac fully agree (on halo, anyway). in fact, zac and aisha seem, in many ways, to have been separated at birth. both are strangely tall. both love video games, zombie movies, and board sports. and both grew up in that terrible, character-forming, abject juvenile state known, simply… as “nerd.”

of course, zac went on to exact the best nerd revenge possible: playing a tech-geek-turned-international-spy on the NBC series “chuck.” but he hasn’t abandoned his roots, embracing the tribe through his online community the nerd machine, annual pilgrimages to the geekhalla that is comic-con, and by freely and without qualification, calling himself the n-word (nerd). buried inside the 6’4”, yoked, surfing, car-racing tv star is still a musical-theater loving, rollerblading, song parody-performing pre-teen… and he is stoked at how things turned out.

join aisha and zac as they geek out about zombie movies, comic-con, clowns in outer space, time crisis, and the agony of getting assassinated online by a six-year old named “captain teabag.”  and zac unveils mad song-parody skills in this week’s self-inflicted wounds.