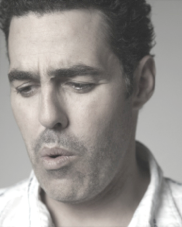 adam carolla is not fucking around.from the minute he pulled himself, phoenix-like, from the ashes of his former life as a carpenter/boxing coach/beer drinking ne’er-do-well, adam’s been working like a spartan. from loveline to the man show to crank yankers to the adam carolla show, nothing has stopped him, including having his wildly successful syndicated morning radio program canceled to make way for some bullshit top 40 format radio.after the morning show was axed, adam did what felt right: he kept making his show. granted, it was a podcast, at first out of his home office, and about as guerilla as it came. but now the adam carolla show is the number one downloaded podcast in the world, podcasted five days a week from a brand-spanking new studio filled with shining equipment and extraordinary guests. and where there was once the dated computers and exposed wires of a home studio, there are now cherry vintage race cars and mountainous piles of gold dubloons. this is the house that 60 million internet downloads bought.join aisha and adam as they talk about their mutual love of fast machines, the early days of adam’s podcast, how persistence and stalking are remarkably similar, and why everyone else in hollywood is such a pussy.