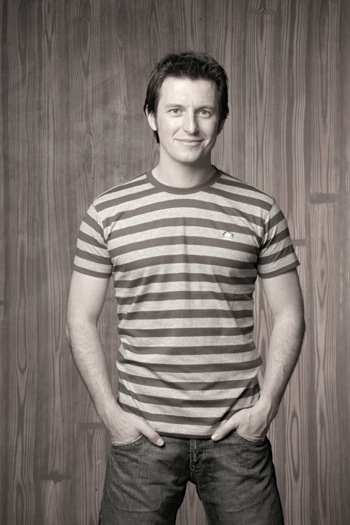 rove mcmanus is delightful. a bit too delightful to tolerate.

cheery, hardworking, focused, self-effacing, funny without trying, friendly without being treacly, dazzled by such simple things as turkey wraps and candied yams — rove is entirely too lovely to be a late night personality, let alone one of australia’s most well-known and beloved comedians, host of a show where guests drink, swear, dance badly and occasionally engage in full-frontal nudity on high-speed amusement park rides.

rove has always wanted to do things differently, and once he got on television, rather than rest on his laurels, he set about breaking every rule he could get his hands on. refusing to be either jaded or complacent, when things don’t feel right, he had the discipline to walk away, as he did after ten years on his successful show rove live. after a hiatus, the show is back, in a new iteration based in los angeles. on rove la, rove is back to doing what he does best, bringing celebrities together for wide-ranging, uncensored, and often drunken, sprawling, spectacular and slurry conversation, punctuated by jabs of his own smart, bawdy, and uniquely australian sense of humor.

rove is hilarious, punchy, dry, charming and utterly forthcoming. it’s enough to make you want to puke. politely, of course.

girl on guy is lying in a den in bombay.