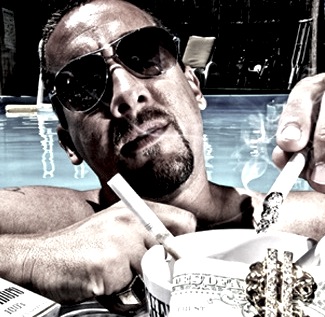 if the adage is true — that tragedy plus time equals comedy — then ryan sickler has paid his dues on the left side of the equation. raised in baltimore, a town which one doesn’t leave so much as escape, he lost his father when he was a teen, was thrown into the street by his mother, and after that, bounced from one relative to another. it was finally a great-aunt who gave him the chance to get back on his feet, and when he finally did, he did that shit like he meant it.

ryan worked, saved, finished school, packed all his stuff into garbage bags and drove to los angeles to follow his dream of being a comic. and while his early years might have seemed rocky, that tumultuous childhood gave him both fodder for material and armor against the relentless onslaught that is life as a standup comic.

now ryan is in the trenches every day, performing, touring, and hosting the crabfeast, the popular and hilarious podcast he created alongside comedian jay larson. inspired by the town where he was born, the show celebrates the things ryan loves most — storytelling, comedy, and, well, boobs. for the month of october, the show focused on raising money for breast cancer research and prevention. ryan is a breast man, and he has put his money where his — ahem, mouth is.

join comedian ryan sickler of the crab feast podcast and aisha for a drunken girl on guy live from the la podcast fest as they talk jesus’ haircut, pussy wagons, comedy competitiveness, hometown rage, sex and car horns, suicide by marriage, hand job killers, terrible road stories, and heckling people into submission. plus ryan and aisha do some daytime drinking, then ryan does his part for boobs.

girl on guy says it ain’t christmas without casserole.