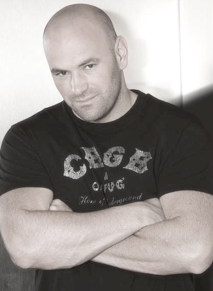 if ufc president dana white looks like he might’ve had it rough growing up, it’s because he did. dana grew up in a las vegas that was less sinatra, steaks, and luck and more street fights and brickbats amidst sweltering heat.

finally escaping a city where high school rivalries were settled with mass brawls, and gangs of teens eager to throw down would show up routinely in his front yard, dana moved east. he took his love of fighting off the street and into the gym, first training, then promoting fighters.

dana had an unwavering passion for boxing. until he saw his first ultimate fight.

when the opportunity came up to purchase a floundering ultimate fighting championship, dana saw gold. he persuaded a couple of childhood friends to buy the declining organization for just two million dollars. and then spent the next decade turning that anemic, failing group into a billion dollar business.

that’s right. the ufc is now worth a billion dollars, mixed martial arts is the fastest growing fighting sport in the world, and dana sits atop the pile. and now the guy who once worked as a bellman and rode his boxing equipment across town on a bicycle because he couldn’t afford a car is now president and co-owner of a billion dollar fighting organization widely seen as the preeminent promoter of professional combat in the world.

not bad for a dude from the desert.

join UFC sensei dana white and aisha as they pin down fighting off a teenage mob, the power of apology, saving saturday, perfecting the ground game, being pinned by a girl, and knowing when to tap out.

plus, dana has a few choice words for the internet, and aisha chimes in recklessly.

girl on guy is about to enter the octagon.