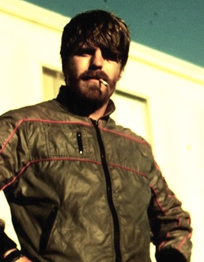 evan glodell’s is a cinderella story.

if cinderella was a dude, had a childhood filled with near-death brushes with explosives, dug around in abandoned factories for spare parts to make electrified car seats, dropped out of high school, spent his rootless twenties selling blood for beer money, moved to hollywood and spent three homeless years making a movie with every spare cent and moment he could scrounge, using cameras he built himself from scavenged parts, and eventually submitted the resulting dreamlike meditation on the decay of relationships and the end of the world to sundance.

and sold the movie.

and completely changed his life.

evan glodell loves movies. he loves making things and explosions and fire and passion and art. but most of all he loves movies. so much so that he gave up everything he had to make one. that film, called bellflower, sold at sundance, got film distribution, and is out now on itunes and dvd. but how it was made, and how he got here, much like the film, is a story that has to be heard to be believed.

join wild-eyed dreamer and bellflower director evan glodell and aisha as they talk about the end times, wasted youth, building rudimentary bombs, building more complex bombs, making a movie with nothing but sheer will and frenzy, selling blood for beer, and following your dreams no matter the cost. plus, aisha is ashamed of her feelings, and evan knows how to make way cooler sh*t than you.

girl on guy is meeting up with evan after the apocalypse.