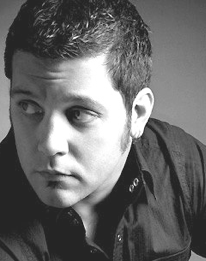 girl on guy 28: george stroumboulopoulos
strombo tonight on the cbc

george stromboulopoulos is a very unlikely celebrity. he wasn’t discovered by a hollywood agent. he didn’t write himself a million dollar check while living in his car. he doesn’t have a sex tape. hell, you can’t even pronounce the guy’s name (save yourself the agony — just call him strombo.)

what george stromboulopoulos is, is driven. earnest. humble. and a bona fide, one hundred percent, fangs-down hustler. george got what he has by working — hard, without expectation, entitlement, backstabbing or guile (maybe it’s because he’s canadian).

you may not know george’s name, but he is the number-one personality in canadian late night television. his talk show on the cbc, strombo tonight, has featured guests as wide-ranging as nick cave, tom cruise, ice cube, louis ck, neil young and the canadian prime minister. he is smart, coolly funny, well-researched, articulate, and an effortless interviewer who is truly interested in what his guests have to say and can make a late-night publicity jaunt feel like an authentic conversation. on top of that, he is a true fan — his job hasn’t left him jaded — a guy who got his start in radio, loves music, comedy, and art, and is often encyclopedic about all three. george is killer at what he does, and one of the best guys in late night that you haven’t heard of yet. canada is good for much more than just limp bacon and bruisers on skates — you’re about to be schooled, canuck style.

join canadian late-night prince george stromboulopoulos and aisha as they muse about hollywood douchebaggery, holy rollers, heavy metal, the genius of def leppard, what works in comedy, why we drink, why we don’t, and being on the grind. plus, we meet frosty the hobo, talk sh*t about michael richards, and someone uses a very dirty word. twice. girl on guy. this one tastes like maple.