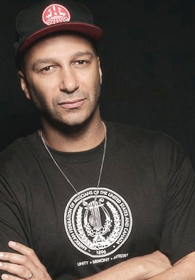 tom morello was probably destined to be in a rock band. from feeling like an outsider in his small midwestern town to having his heart broken by an exotic older woman while in college to having an almost crippling dedication to musical excellence, tom was batting a thousand in terms of teenage angst. but tom wanted to do more than just rock. he wanted to make a statement. he wanted to start a revolution. cue the violins.

but hold the smugness a second. true, it’s an old adage that politics and commercial success don’t mix. and when rage against the machine first started writing their hardcore political anthems, they didn’t think they would ever get booked to play clubs, let alone get a record deal. but now, twenty years and several multiple-platinum albums later, rage is one of the most iconic hard rock bands in history. now reunited, they continue to light up stadium crowds whenever they perform, while never compromising their personal principles or professional musicianship.

with similarly dazzling success in the subsequent superband audioslave and as the nightwatchman, tom clearly isn’t planning to start compromising anytime soon. and after releasing his fourth nightwatchman album and launching a new comic book that throws light on class and poverty struggles in a futuristic dystopia, tom morello may just be helping to fuel that revolution he dreamed about.

join aisha and tom morello of rage against the machine and the nightwatchman discuss small town bigotry, political smut, arena rock guilt, the destructive powers of success, comic book creation, why rage broke up, why rage got back together, and tom’s short but productive life on the pole. plus tom and aisha get soused on whisky both foreign and domestic, and aisha insults a major rock label.

girl on guy. time to wake up.