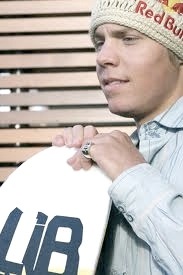 people love to throw the word “extreme” around. extreme energy drinks. extreme comedy. extreme clothing. extreme tortilla chips.but none of these have dropped 300 feet from a rock cornice into the unknown and icy below. as one of snowboarder magazine’s top twenty most influential riders, travis rice has.

at the ripe old age of eighteen and with almost no prior competitive success, travis snagged a competing spot at mammoth mountain’s superpark competition, and as a total unknown, won. he then went on to dominate in national and international competition, becoming one of the country’s best-known snowboarders. unwilling to rest on his laurels, he founded a film company dedicated to changing the way snowboarding movies are made, started self-financing dazzlingly innovative snowboarding films, and in the process, changed the face of big mountain freeriding forever.

travis is now widely held to be the best all-around snowboarder in the world. travis rice lives day to day, without fear, chasing his dreams furiously, with only a plexiglass and metal board and his own steely discipline between him and his destiny. travis rice is redefining extreme.

join travis and aisha as they rave about howitzer guns, TNT, disappointing your parents, delighting your friends, broadswords, homemade bombs, living without a helmet and being willing to fail. plus, travis spends a week as a junkie, the cops in san diego are dicks, and aisha insults canada.

girl on guy. careful. this may leave a mark.