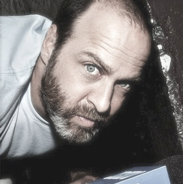 jon benjamin has a powerful and sultry voice that demands both your fealty and payments of tribute, or at the very least, copious laughter. with three television shows on the air, including archer, which kicks off season 3 with special episodes starting september 15, you’ll be hearing more and more of it, starting with an hour of dusky hilarity on this very first episode of girl on guy.

freshly back from screening the first episode of Archer season 3 at the infamous comic-con-slash-swirling-fan-scrum in san diego, jon and i discuss the joys of free booze, the lameness of industry parties, the abjection of standup comedy and… wait for it… the ne plus ultra of crappy airplane food. plus, the explosive inaugural installation of self-inflicted wounds — one that sets the bar for all to follow.