← bonus episode x16: franklin leonard
this is NOT girl on guy 96: henry rollins (aisha has a cold) → 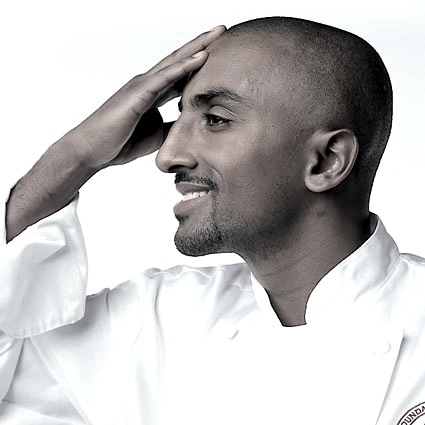 born in ethiopia, adopted by a swedish family at three, he arrived in northern sweden as if waking from a reverie. he grew up eating, and later making, his adoptive grandmother’s nordic specialties in an industrial port town in the frigid north. meatballs. herring. blood sausage. lingonberries.

then came culinary school, a move first to switzerland, then to the us, where he quickly became one of the youngest head chefs in the world. since then he has opened countless restaurants, written a pile of books, and brought his unique polyglot culinary vision to people around the world.

and though he now heads a culinary empire that spans continents, he has never lost sight of where he came from — the importance of place, the influence of family, the power of hard work, or the impact of truly delicious food.

marcus’ run so far may have been like a dream, but he knows better than anyone that dreams take work. hard work.

join international culinary superstar marcus samuelsson and aisha as they discuss the mysteries of fate, waking up from a dream, making blood sausage, giant meatballs, getting fired, cooking for the president, being in the weeds, and excellent opportunities to screw up. plus marcus gets in the weeds and stays there, and aisha eats her weight in herring.

girl on guy has had too much aquavit.